The retail sector at the southern end of the Gold Coast is tipped to soar when the next stage of the city’s light rail project is completed.

The federal government last week announced an extra $157 million for stage three of the light rail network, which will see trams extend from Broadbeach South to Burleigh Heads. This adds to the $351 million that the state government has promised for the next stage and $92 million from the council. Work is expected to begin straight away.

Stage one was completed in July 2014, from Gold Coast University Hospital to Broadbeach South. Stage two was a 7.3-kilometre extension from the hospital to Helensvale Station in the northern Gold Coast and opened in December 2018. 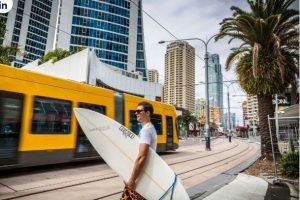 Disruption from construction of the project was likely to be less pronounced than the first stage in particular, given the lower density of retail in the southern Gold Coast region, he said.

“The stage 3A extension of the light rail will be a vital piece of infrastructure for the Gold Coast as it will connect heavy rail from Helensvale Station to the precincts of Southport, Surfers Paradise and Broadbeach, and all the way south through to Burleigh Heads,” he said.

“Ease of access across the city will generate economic growth for retail businesses in the southern Gold Coast catchment.”

He said local retailers would be able to claim a bigger slice of the estimated $5 billion spend that comes from nearly 13 million domestic and international tourists to the Gold Coast each year.

One of the big winners from the project is expected to be Burleigh Heads, according the valuer of another local real estate company. 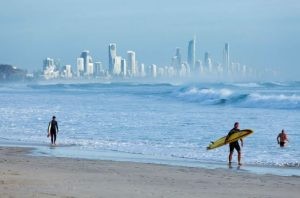 He said the suburb’s retail sector was currently performing well because of strong local patronage but was likely to strengthen further following the project’s completion.

The valuer of a local real estate company said local retailers should be positive about the extension, but they might expect some disruption during construction.

“The light rail will galvanise the long-term relevance of these areas, making access more convenient for those from further afield and will also encourage tourists to venture further south,” he said.

“From a town-planning perspective, it is not unreasonable to expect there will also be some long-term befits as well, as council may be supportive of higher density development around the future stations.”

Brodie Millwood, general manager of popular Burleigh Heads eatery Justin Lane, said the light rail was a positive for the retail sector, but he had concerns about the impact of construction on local businesses.

“The Gold Coast is growing up, there’s a huge number of people moving here. We need a public transport system that can deal with this. This is a step in the right direction,” Mr Millwood said.

He said more tourists and international students as well as events and festivals had been coming to the Gold Coast following the launch of the project.

“The dedicated Gold Coast light rail corridor has been a catalyst for development, with the ‘light rail growth corridor’ driving growth in capital values and higher levels of redevelopment activity,” he said.

“Transport infrastructure projects can have a very positive impact on retail real estate values by improving connectivity and access for consumers.

“It typically spurs investment and development for surrounding property and drives a revitalisation of an area.”