GOLD Coast Airport is celebrating a construction milestone with the completion of the seventh and final storey of its first hotel.

The 192-room Rydges hotel will also host a rooftop bar offering locals and visitors a chance to relax and absorb the stunning panorama of the southern Gold Coast. 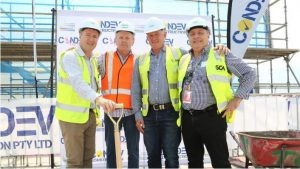 Queensland Airports Limited CEO Chris Mills said it was an incomparable facility as far as Australian airports are concerned.

“The views you get at this end of the Gold Coast, particularly on the seventh floor mean you can see over the runway to the hinterland and the ocean,” he said.

“I think we’ll find there’ll be quite a lot of locals who will see this as something unique and use the rooftop bar and that will complement the number of people that will be travelling and staying in the hotel as well.”

The view overlooking the tarmac from the top floor of the new Gold Coast Airport Rydges hotel. The seven floor hotel will have a rooftop bar offering sweeping views of the Gold Coast Hinterland and ocean.

Mr Mills said it was never easy to build around an airport however, construction was tracking well for its mid-2020 opening.

“Now the building structure is complete, next year the focus will be on the exterior façade and the internal fit-out, once you get into the internals, it is a bit easier.”

The hotel build is part of the $500 million airport upgrade which involves expanding the terminal to three levels with aerobridge connections to aircraft.

Commercial Property on Track for Another Record-Breaking Year