Do you want to live out your wildest Downton Abbey fantasies but don’t fancy the British climate?

From grand country estates with hectares to spare to inner-city mansions on bustling streets, there’s no shortage of impressive historical properties with commercial potential here in Australia.

We’ve rounded up some of the most spectacular properties currently on the market that hark back to a bygone era. The Woollahra property was built in 1885 and converted into a doctor’s surgery in 1918. Photo: Supplied

The only property on our list located in a city, Icasia was constructed as a two-storey Victorian Italianate house in 1885 and was converted in 1918 to a doctor’s surgery, according to Woollahra Municipal Council.

The restored property – recently used as a business headquarters – has subsequently had townhouses built at the rear and is now part of a strata scheme.

The expansive layout could be used as a residence, consulting rooms or a combined home and office, according to the listing.

Consisting of four bedrooms/offices and one bathroom, the property’s standout features include a verandah with lacework balcony, soaring 3.4-metre ceilings, an opulent foyer and a leafy private-level garden.

Icasia – at 80 Old South Head Road, Woollahra – is set to go under the hammer on November 4. 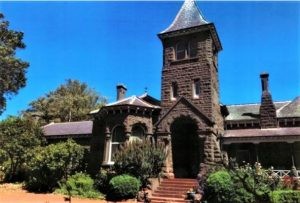 The Kolor Homestead in Penshurst was built in 1868. Photo: Supplied

Daniel Twomey constructed the building in 1868 to the design of Reed & Barnes architects. The Twomey family – who had a significant presence in the district – remained at the homestead until 1928.

The Heritage Council Victoria notes it is a “Romanesque revival version of the fashionable Italianate style” and has historical significance as “one of the earliest and most important squatting runs in the Western District, [and] for its association with the failed Aboriginal settlement at Mount Rouse”.

The property retains a library and billiard room as well as a cellar.

It remains on the market after an initial expressions-of-interest campaign ended in August. This mansion in Windsor, NSW was built in 1833. Photo: Supplied

Built in 1833 by William Cox, this Georgian mansion is on the market for the first time in close to 30 years.

The property, on 7822 square metres, is being pitched at commercial operators wishing to establish “a boutique hotel, day spa, convention centre, aged-care facility, nursing home, retirement village or wedding reception venue,” according to the listing.

Featuring a portico with tessellated tiles, a reception room with stained glass, a fireplace of white Italian Cararra marble and even the original wall brackets used to hold candles, the property contains myriad references to its opulent origins.

The property has plenty of history to match the aesthetics. Henry McQuade, manager of Her Majesty’s Theatre in Sydney, is said to have entertained his theatrical celebrities at the property from 1866, and at one point the grounds sported a cricket oval with pavilion and a racetrack where a test match between a Hawkesbury Eleven and an all-England Eleven was played.

Those wishing to host their own sporting events might want to take up the approved DA for a tennis court, although the property already has access to the 18-hole golf course next door. 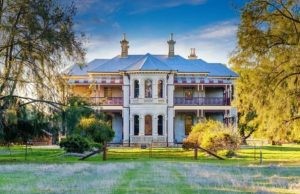 Fairfield – which was described, at one point, as Australia’s largest vineyard and winery complex – is located in the Victorian wine-producing region of Rutherglen.

The 852-hectare property has a long history with the Morris family, having been established by renowned 19th-century vigneron George Francis Morris and later brought back into family ownership by his great-granddaughter, Melba Morris-Slamen in 1973.

Mrs Morris-Slamen died in December, and the property is being sold to wind up her estate, touted as having “tourism, cropping, grazing and viticulture potential”. 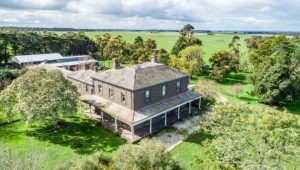 Ingleby was one of the first properties constructed in Victoria’s west. Photo: Supplied

Operating as a beef stud, Ingleby in Victoria’s western district is on the market for the first time in 21 years.

The focal point of the property is a two-storey, six-bedroom homestead built in 1860 by pastoralist George Armytage. The house has a heritage overlay and is recognised for its “architectural significance as a major surviving work of the accomplished Geelong architect Edward Prowse”.

The homestead, which features a cedar staircase, historical glass windows, internal chimneyed fireplaces and a wraparound verandah, needs significant work to bring it up to scratch, according to the director , listing agent, of a local real estate company.

Surrounding the homestead are stables, a coach house, workshop, staff quarters, a stone woolshed and three other cottages, which are included in the sale.